By now, you’ve probably heard as much as you can bear about mobile first indexing. For me, there’s been one topic that’s been conspicuously missing from all this discussion, though, and that’s the impact on internal linking and previous internal linking best practices.

In the past, there have been a few popular methods for providing crawl paths for search engines — bulky main navigations, HTML sitemap-style pages that exist purely for internal linking, or blocks of links at the bottom of indexed pages. Larger sites have typically used at least two or often three of these methods. I’ll explain in this post why all of these are now looking pretty shaky, and what I suggest you do about it.

Internal linking is and always has been a vital component of SEO — it’s easy to forget in all the noise about external link building that some of our most powerful tools to affect the link graph are right under our noses. If you’re looking to brush up on internal linking in general, it’s a topic that gets pretty complex pretty quickly, but there are a couple of resources I can recommend to get started:

I’ve also written in the past that links may be mattering less and less as a ranking factor for the most competitive terms, and though that may be true, they’re still the primary way you qualify for that competition.

A great example I’ve seen recently of what happens if you don’t have comprehensive internal linking is eflorist.co.uk. (Disclaimer: eFlorist is not a client or prospective client of Distilled, nor are any other sites mentioned in this post)

eFlorist has local landing pages for all sorts of locations, targeting queries like “Flower delivery in [town].” However, even though these pages are indexed, they’re not linked to internally. As a result, if you search for something like “flower delivery in London,” despite eFlorist having a page targeted at this specific query (which can be found pretty much only through use of advanced search operators), they end up ranking on page 2 with their “flowers under £30” category page: 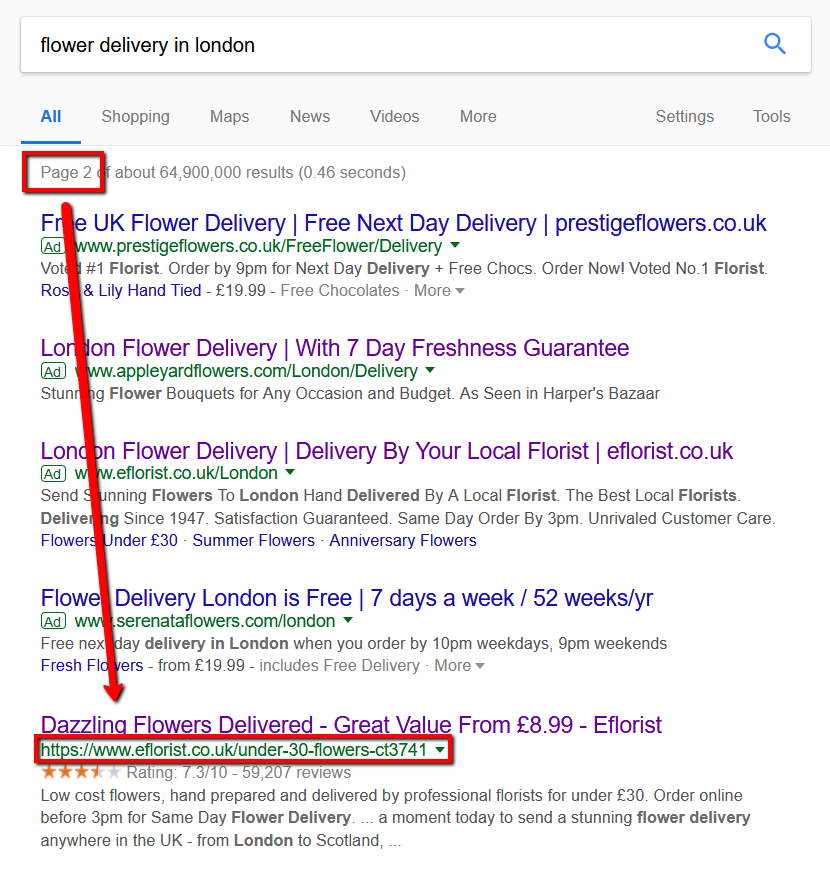 If you’re looking for a reminder of what mobile-first indexing is and why it matters, these are a couple of good posts to bring you up to speed:

In short, though, Google is increasingly looking at pages as they appear on mobile for all the things it was previously using desktop pages for — namely, establishing ranking factors, the link graph, and SEO directives. You may well have already seen an alert from Google Search Console telling you your site has been moved over to primarily mobile indexing, but if not, it’s likely not far off.

Get to the point: What am I doing wrong?

If you have more than a handful of landing pages on your site, you’ve probably given some thought in the past to how Google can find them and how to make sure they get a good chunk of your site’s link equity. A rule of thumb often used by SEOs is how many clicks a landing page is from the homepage, also known as “crawl depth.”

If you don’t believe me on the first point, check out this Twitter conversation between Will Critchlow and John Mueller: 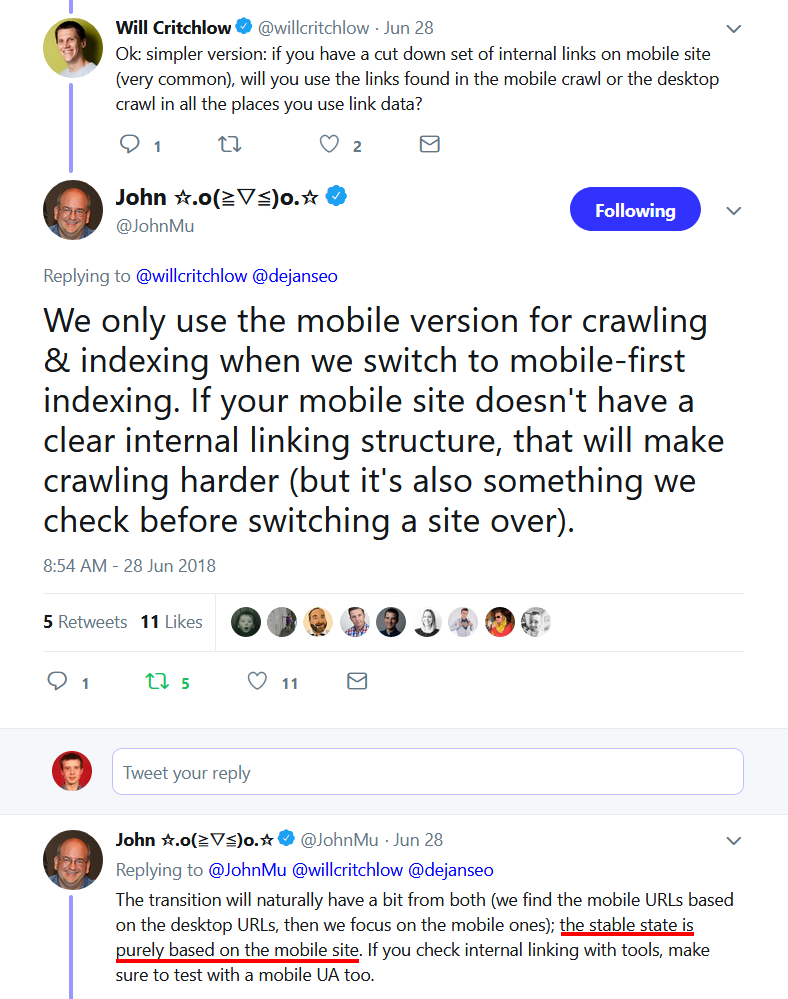 In particular, that section I’ve underlined in red should be of concern — it’s unclear how much time we have, but sooner or later, if your internal linking on the mobile version of your site doesn’t cut it from an SEO perspective, neither does your site.

And for the links that do remain visible, an internal linking structure that can be rationalized on desktop can quickly look overbearing on mobile. Check out this example from Expedia.co.uk’s “flights to London” landing page: 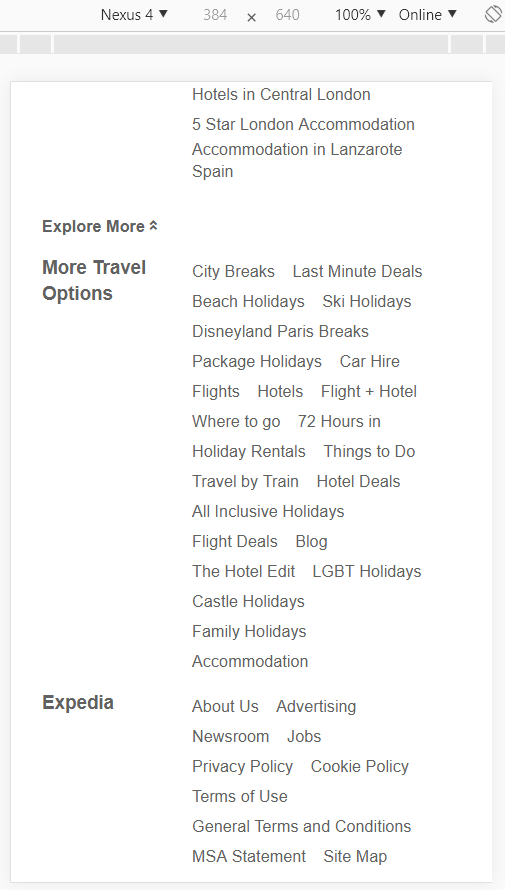 Many of these links are part of the site-wide footer, but they vary according to what page you’re on. For example, on the “flights to Australia” page, you get different links, allowing a tree-like structure of internal linking. This is a common tactic for larger sites.

In this example, there’s more unstructured linking both above and below the section screenshotted. For what it’s worth, although it isn’t pretty, I don’t think this is terrible, but it’s also not the sort of thing I can be particularly proud of when I go to explain to a client’s UX team why I’ve asked them to ruin their beautiful page design for SEO reasons.

I mentioned earlier that there are three main methods of establishing crawl paths on large sites: bulky main navigations, HTML-sitemap-style pages that exist purely for internal linking, or blocks of links at the bottom of indexed pages. I’ll now go through these in turn, and take a look at where they stand in 2018.

The most extreme example I was able to find of this is from Monoprice.com, with a huge 711 links in the sitewide top-nav:

Here’s how it looks on mobile: 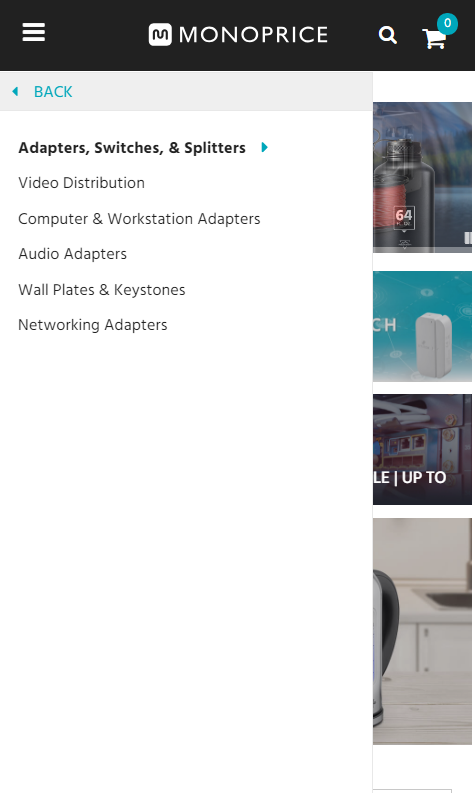 This is actually fairly usable, but you have to consider the implications of having this many links on every page of your site — this isn’t going to concentrate equity where you need it most. In addition, you’re potentially asking customers to do a lot of work in terms of finding their way around such a comprehensive navigation.

I don’t think mobile-first indexing changes the picture here much; it’s more that this was never the answer in the first place for sites above a certain size. Many sites have tens of thousands (or more), not hundreds of landing pages to worry about. So simply using the main navigation is not a realistic option, let alone an optimal option, for creating crawl paths and distributing equity in a proportionate or targeted way.

2. HTML sitemaps: Ruined by the counterintuitive equivalence of noindex,follow & noindex,nofollow

This is a slightly less common technique these days, but still used reasonably widely. Take this example from Auto Trader UK: 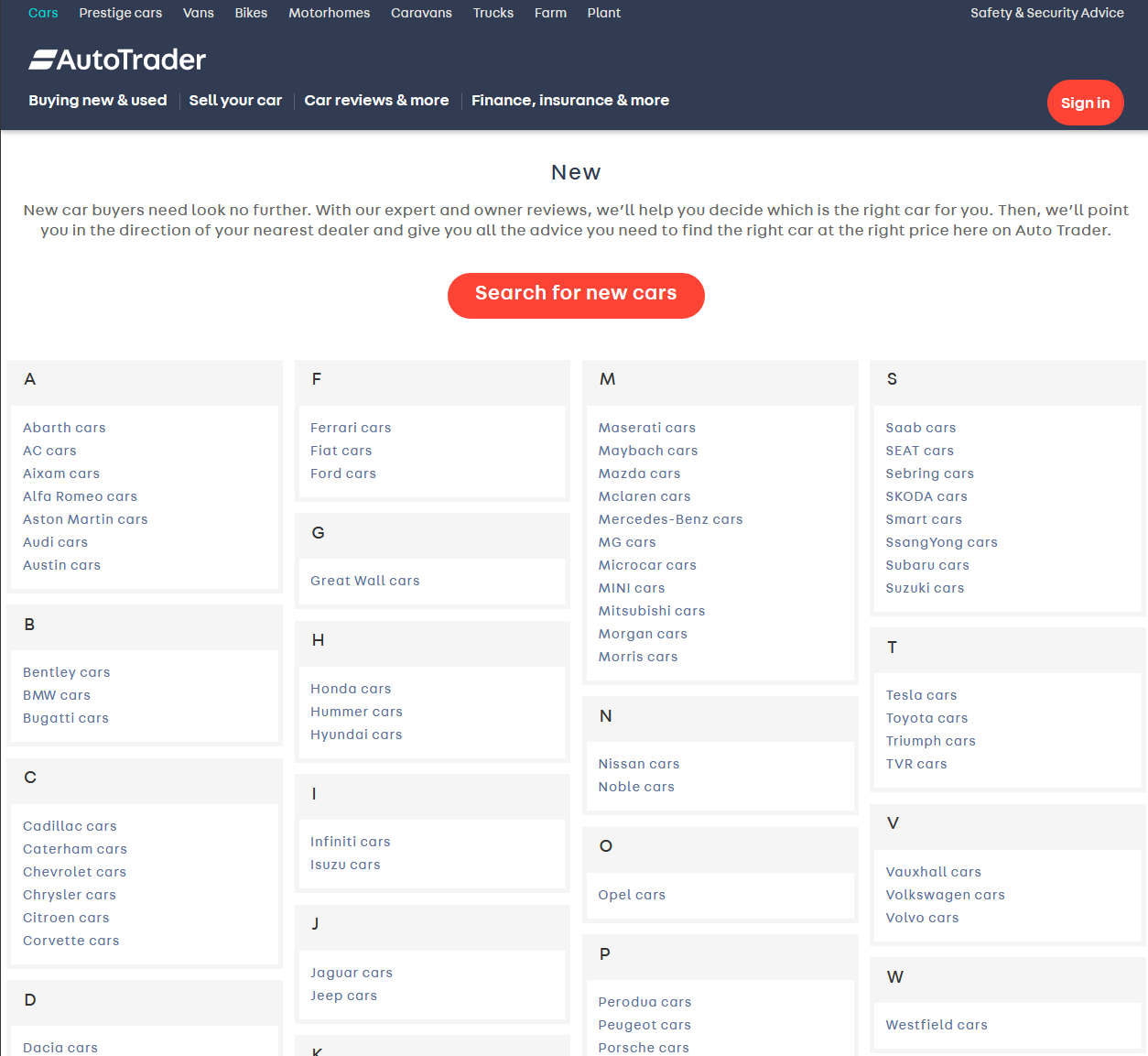 This page isn’t mobile-friendly, although that doesn’t necessarily matter, as it isn’t supposed to be a landing page. The idea is that this page is linked to from Auto Trader’s footer, and allows link equity to flow through into deeper parts of the site.

However, there’s a complication: this page in an ideal world be “noindex,follow.” However, it turns out that over time, Google ends up treating “noindex,follow” like “noindex,nofollow.” It’s not 100% clear what John Mueller meant by this, but it does make sense that given the low crawl priority of “noindex” pages, Google could eventually stop crawling them altogether, causing them to behave in effect like “noindex,nofollow.” Anecdotally, this is also how third-party crawlers like Moz and Majestic behave, and it’s how I’ve seen Google behave with test pages on my personal site.

That means that at best, Google won’t discover new links you add to your HTML sitemaps, and at worst, it won’t pass equity through them either. The jury is still out on this worst case scenario, but it’s not an ideal situation in either case.

So, you have to index your HTML sitemaps. For a large site, this means you’re indexing potentially dozens or hundreds of pages that are just lists of links. It is a viable option, but if you care about the quality and quantity of pages you’re allowing into Google’s index, it might not be an option you’re so keen on.

3. Link blocks on landing pages: Good, bad, and ugly, all at the same time

I already mentioned that example from Expedia above, but here’s another extreme example from the Kayak.co.uk homepage: 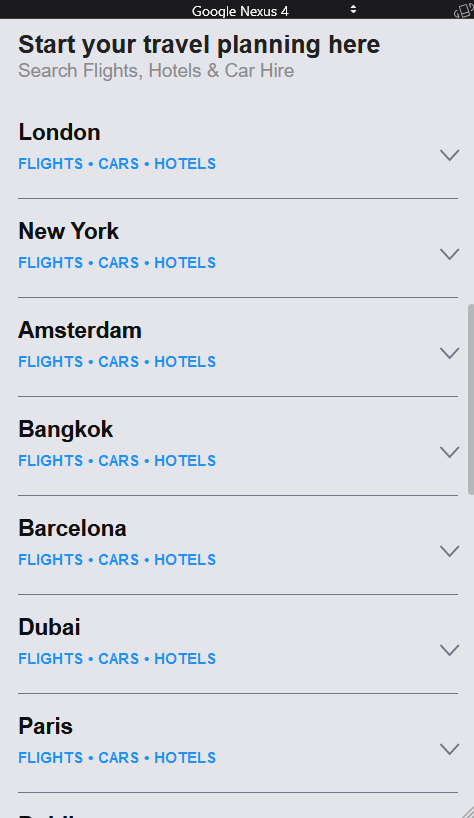 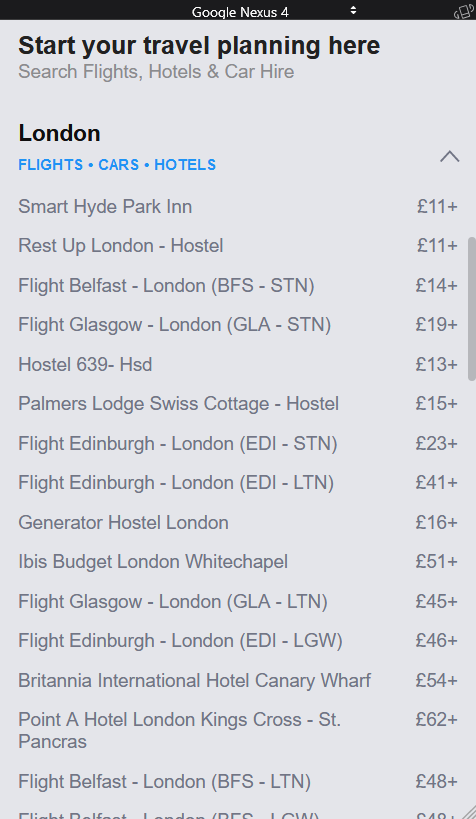 It’s no coincidence that both these sites come from the travel search vertical, where having to sustain a massive number of indexed pages is a major challenge. Just like their competitor, Kayak have perhaps gone overboard in the sheer quantity here, but they’ve taken it an interesting step further — notice that the links are hidden behind dropdowns.

This is something that was mentioned in the post from Bridget Randolph I mentioned above, and I agree so much I’m just going to quote her verbatim:

Note that with mobile-first indexing, content which is collapsed or hidden in tabs, etc. due to space limitations will not be treated differently than visible content (as it may have been previously), since this type of screen real estate management is actually a mobile best practice.

Combined with a more sensible quantity of internal linking, and taking advantage of the significant height of many mobile landing pages (i.e., this needn’t be visible above the fold), this is probably the most broadly applicable method for deep internal linking at your disposal going forward. As always, though, we need to be careful as SEOs not to see a working tactic and rush to push it to its limits — usability and moderation are still important, just as with overburdened main navigations.

Summary: Bite the on-page linking bullet, but present it well

Overall, the most scalable method for getting large numbers of pages crawled, indexed, and ranking on your site is going to be on-page linking — simply because you already have a large number of pages to place the links on, and in all likelihood a natural “tree” structure, by very nature of the problem.

Top navigations and HTML sitemaps have their place, but lack the scalability or finesse to deal with this situation, especially given what we now know about Google’s treatment of “noindex,follow” tags.

However, the more we emphasize mobile experience, while simultaneously relying on this method, the more we need to be careful about how we present it. In the past, as SEOs, we might have been fairly nervous about placing on-page links behind tabs or dropdowns, just because it felt like deceiving Google. And on desktop, that might be true, but on mobile, this is increasingly going to become best practice, and we have to trust Google to understand that.

All that said, I’d love to hear your strategies for grappling with this — let me know in the comments below!