The optimized site also helped them get meetings with some of the biggest names in the venture capital community — a big feat for a Poland-based team without the pedigree typically required (no MIT, Stanford, Ivy League, Google, Facebook, Amazon, Microsoft background).

Repux is a marketplace that lets small and medium businesses sell anonymized data to developers. The developers use the data to build “artificially intelligent” apps, which they then sell back to businesses. Business owners and managers use the apps to make better business decisions.

Below is the original page, which linked to a dense whitepaper. We don’t know who decided that an ICO requires a long, dry whitepaper, but this seems to be the norm!

This page above suffers from several issues:

Below is the new page that produced a 253% gain in leads (email opt-ins). Coupled with the email follow-up sequence shown below, it produced a nearly 100% gain in token sales.

Winning page (above the fold): 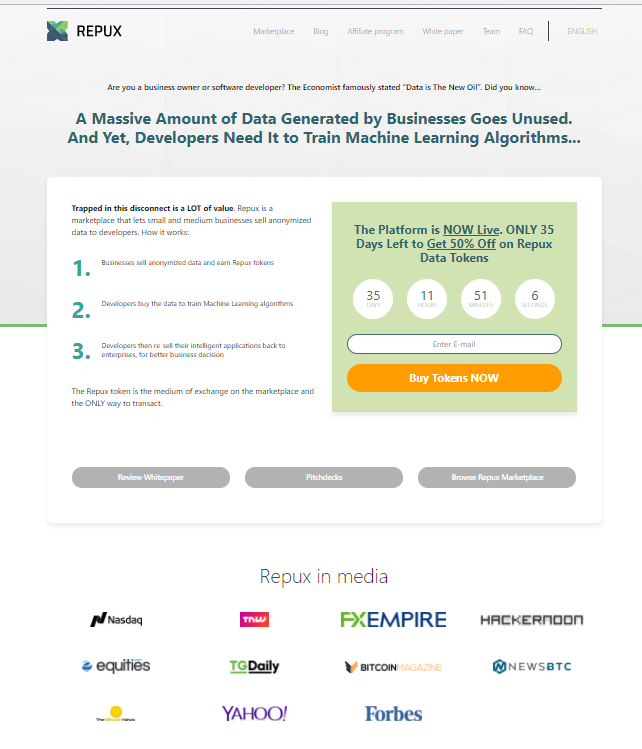 Here are few of the elements that we believe made a difference:

More persuasive elements (below the fold):

In the second span (the next screenful below the fold) we added a few more persuasive elements.

For one, we highlighted key Repux accomplishments and included bios of two advisors who are well known in the crypto-community. 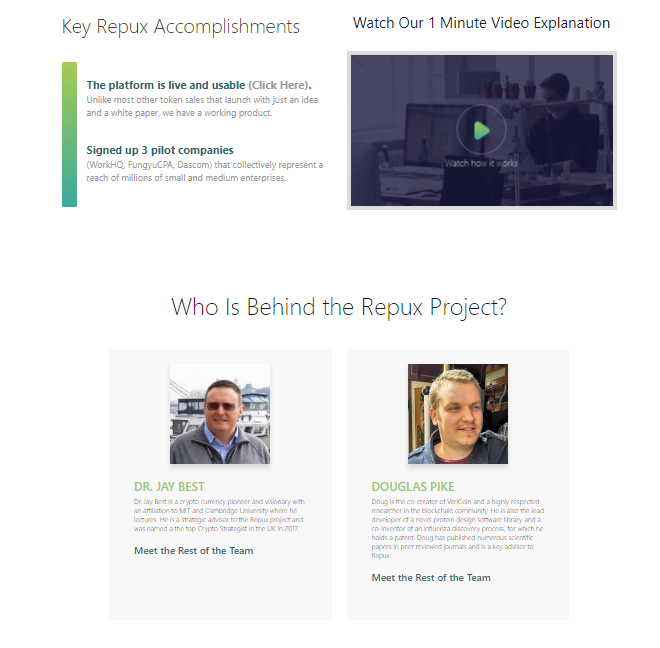 Having a working platform was an important differentiator because only one in 10 ICOs had a working product. Most launched with just a whitepaper!

A survey of the token buyers showed that mentioning well-known advisors worked — several respondents said it was the decisive factor in persuading them to buy. Before, the advisors were buried in a little-visited page. We featured them more prominently.

Interestingly, this seemed to cut both ways. One of the non-contributors said he was initially interested because of a certain advisor’s involvement. He later chose not to contribute because he felt this advisor’s other flagship project had been mismanaged!

We also used 3 concrete examples to show how the marketplace functions and how the tokens would be used: 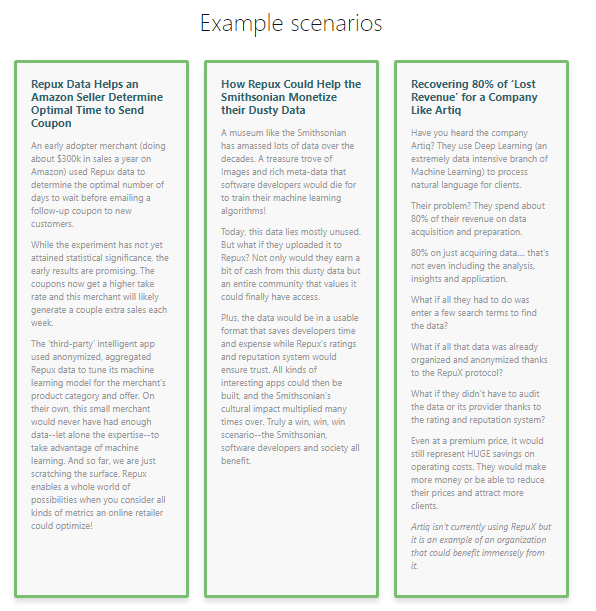 When your product is highly abstract and technical, using concrete examples aids understanding. We also found this to be true when pitching to professional investors. They often asked, “Can you give me an example of how this would work in the real world?”

We like long-form pages because unlike a live selling situation, there’s no opportunity for a back-and-forth conversation. The page must therefore overcorrect and address every objection a web visitor might have.

Lastly, we explained why Repux is likely to succeed. We quoted Victor Hugo for good measure, to create an air of inevitability: 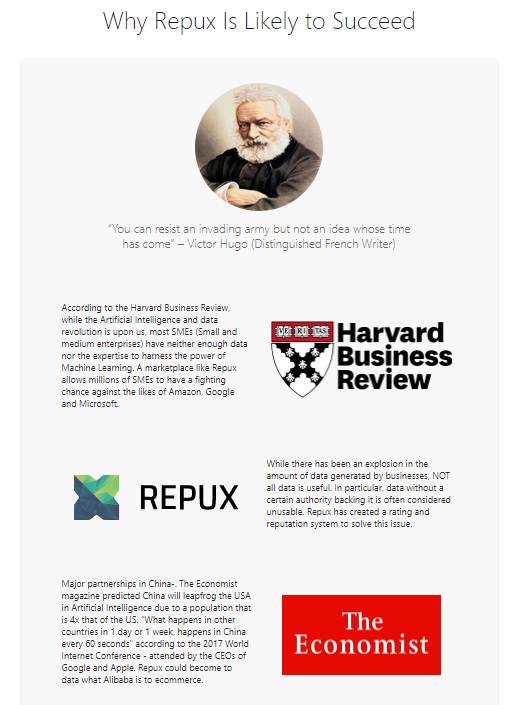 How much impact did Victor Hugo have? I don’t know, but the page did much better overall. Our experience shows that radical redesigns (that change many page elements at the same time) produce higher conversion lifts.

Once you attain a large lift, if you like, you can then do isolation testing of specific variables to determine how much each change contributed.

The page below led to a further 13% lift. 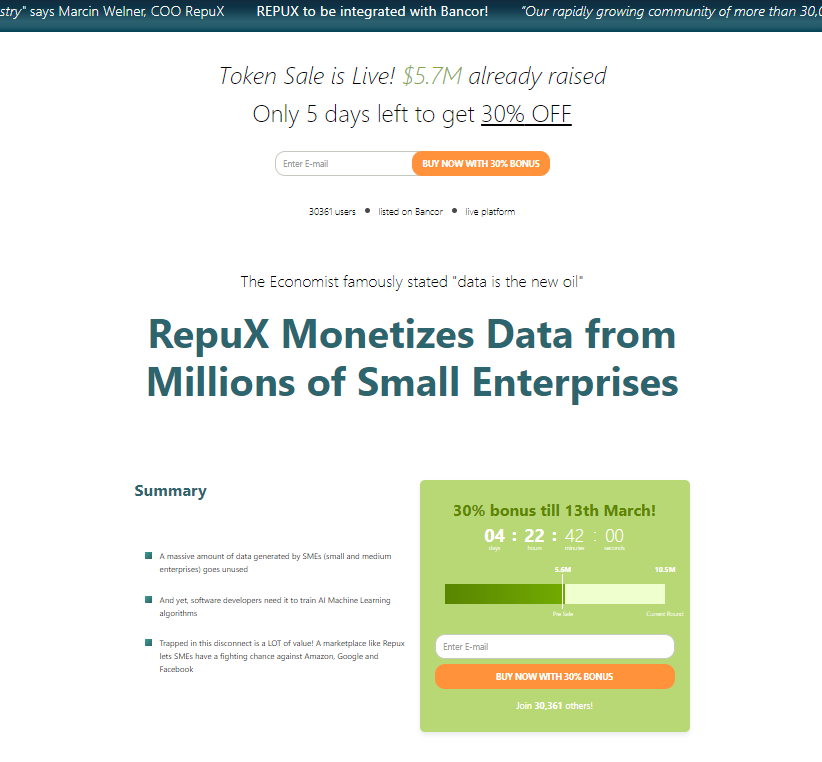 The key elements we changed were:

We’ve seen this in Mouseflow heatmaps. You can do this test yourself: List a bunch of bullet points versus a numbered list and with a compelling headline: The 7 Reasons Why 20,0000 Doctors Recommend Product X or The 3 Key Things You Need to Know to Make an Informed Decision. 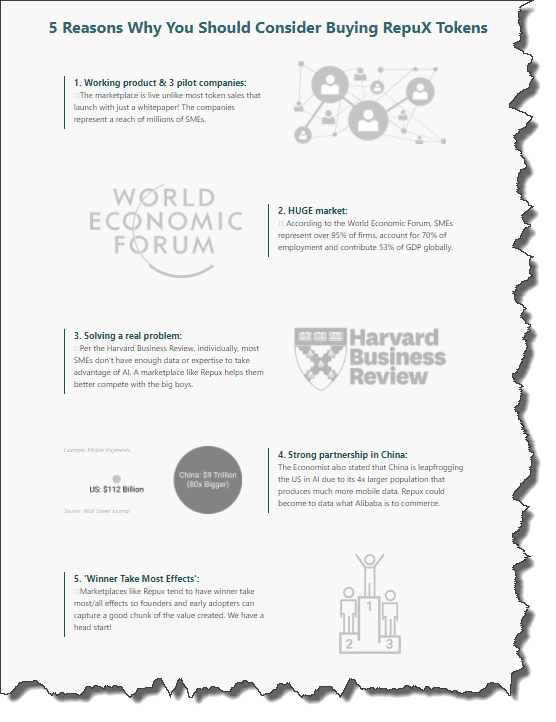 We also created a follow-up email sequence for Repux that led to more token sales.

We got more sales than most people get clicks. Here’s a link to three sample emails we sent.

Our emails are effective because:

Email is a massively underutilized medium. Most businesses are sitting on goldmines (their email list) without realizing it! You can — and should — make at least 2x to 3x as many sales from your email list as you do from direct website sales.

It takes a lot of work to write an effective sequence, but once you do you can run it on autopilot for years, making money hand over fist. As customer acquisition gets ever more competitive and expensive, how well you monetize your list can make the difference between success and failure.

To increase the conversion rate on your website and get more sales, leads, or app downloads, follow these simple steps:

Simple, but not easy. It takes diligence and discipline to do these things well. But if you do, you will be richly rewarded!

And if you’d like to learn more about conversion rate optimization or review additional case studies, we encourage you to take our free course.

Thanks to Jon Powell, Hayk Saakian, Vlad Mkrtumyan, and Nick Jordan for reading drafts of this post.